Inside the Pizza World Championships

How I wish I were in Parma, Italy! Not only is this the home of the legendary dry-cured ham, but it’s also the location of the annual Pizza World Championships which is taking place there this week. This is what it looks like behind the scenes.

If you don’t parlate italiano, you’ll be hard-pressed to find much information about this competition online in English (thank God for Google Translate!), other than some rather effusive coverage from proud Australian papers about the Melburnian who won Best Napoletana in last year’s competition.

The Campionato Mondiale della Pizza has been around since 1991 and attracts 600 pizza chefs each year from around the world to compete for one of 12 coveted awards.

The internet says that 5 billion pizzas are sold worldwide each year and that there are almost 70,000 pizzerias in the US alone, which means that there must be a squabillion pizza chefs around the world. And it just so happens that my favourite pizza chef of them all, Antonio Cerrato, was invited to take part as one of the 600 competitors vying for the title of Master Pizzaiolo! Check out Antonio masterfully tossing his dough! 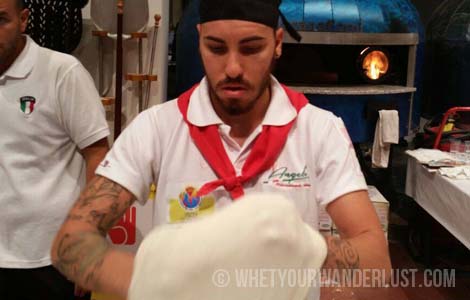 Thank you to Antonio for sharing his pics. Almost as good as being there in real life; but at the same time, not good at all since I can’t eat any of the pizza! Not quite sure what this pic is of because it doesn’t actually look like a pizza, but that’s some mighty fine looking ham!

In other pizza news, my local pizzeria in Dubai Marina, where Antonio was pizza chef, closed this week, though it may reopen in another location after the sweltering Dubai summer.

But having eaten enough of his pizza over the past year to last a lifetime and having turned into a small doughball myself, I consider myself qualified to say that his pizza is definitely worthy of being crowned World’s Best Pizza. But let’s just see what Heinz Beck has to say about that.

There was an error retrieving images from Instagram. An attempt will be remade in a few minutes.